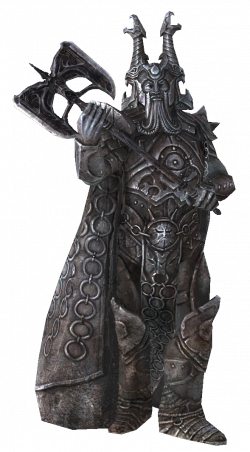 Ysgramor was the first High King of Skyrim and founder of the Companions.

He arrived in Tamriel fleeing civil war in the Nede homeland of Atmora. Here, he founded the city of Saarthal and the Ysgramor Dynasty. Ysgramor was forced to flee again when the elves invaded in the Night of Tears and burned Saarthal to the ground. He eventually returned at the head of the Five Hundred Companions, an organization of five hundred of his best warriors. With the Companions at his back, Ysgramor took back Skyrim from the elves.

It is not known when or how he died. But Ysgramor's Tomb is located north-east of Winterhold on a small island just off the coast. The only way to enter the tomb is to return the weapon Wuuthrad to the hands of Ysgramor's statue there.