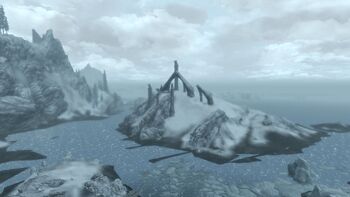 Yngvild is an ice cave located north-east of Dawnstar. It is home to Arondil, a necromancer, and guarded by his ghostly servants and draugrs. Vekel from The Thieves' Guild will send you on a quest to retrieve four of Arondil's Journals.

There is also an Unusual Gem in the bed chamber behind the throne.

The heart of the ice maze, the throne room is where Arondil awaits. He has Arondil's Key on his body to get out of the prison area where Breton, Nord and Redguard women lie dead.