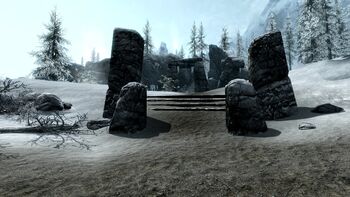 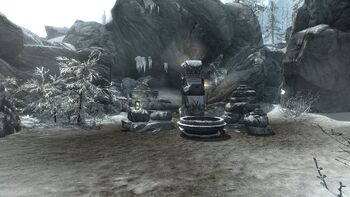 Yngol Barrow is a Nordic ruin located north-east of Windhelm, along the south side of the White River.

Once inside, there is a small glowing blue orb, possibly a "sea ghost" which seems to be leading the way through. As the Dragonborn progresses through the barrow, more and more small orbs join in until there are five of them. Ultimately, the Dragonborn reaches a room with a locked gate, and a dead scholar with Notes on Yngol Barrow on his remains. Also around the room are four small alcoves, three of which contain rotating pillars. The Notes describe which the pillars should be set to which glyph.

Then throw the lever to open the gate to continue on to the throne room.

One last barrier remains, a dragon claw puzzle which requires the Coral Claw.