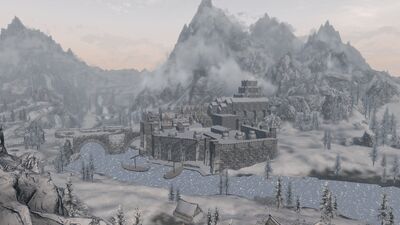 Windhelm is a city in northeastern Skyrim with the dubious honour of being considered the snowiest. The Stormcloaks have powerful sway and enforce the law here, as it is ruled by their leader, Jarl Ulfric Stormcloak. He uses this city as the headquarters for his rebellion against the Empire. He rules by right of descent from his father, the previous Jarl. His policies, while permitting the forbidden worship of Talos, permit persecution and harassment of non-Nords, such as the Dunmer (who live in squalor in the 'Gray Quarter') and the Argonians (who make their best of surviving outside the city on the docks).