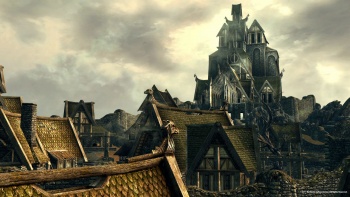 The city of Whiterun is the capital of the hold of the same name. It is divided into three districts: the Plains District is home to the city's shops and market, as well as the inn, while the Wind District is mostly residential, and houses the homes of the more affluent citizens such as the Battle-Borns and the Grey-Manes and the Cloud District, which is home to Dragonsreach, the jarl's palace.

When first approached, a city guard will stop players at the gate and say, "The city is closed with the dragons about." There are a few options: offer him news about the dragon attack at Helgen, bribe him with 56 gold, or intimidate him by asking him to stand aside.