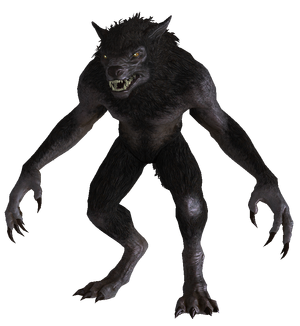 The Dragonborn, regardless of their chosen race, can become a Werewolf in The Elder Scrolls V: Skyrim. Although not available in the very beginning of character creation, becoming one is possible when one joins the Companions located in Whiterun. After performing a few quests, the player can choose to partake in a Blood Oath and become a Werewolf like most of the Companion clan.

The Beast Form power can be used once a day, and is used just like a shout. Once you become a werewolf, you can never gain rested bonuses from sleep unless you find a cure. As a Werewolf, sprinting is much faster, stamina is greatly increased, and attacks do much more damage. Your claws are your only weapon yet they are extremely useful (although in some kill animations, your mouth can be seen eating the enemy). Power attacks as a Werewolf are used to stun enemies and send them flying. Attacking while sprinting is one of the most powerful attacks in the game, as your werewolf slashes their claws at high speeds. Roaring or howling can also be used to scare certain enemies away in order to make defeating a larger group easier. In order to stall the inevitable transformation back into a human for roughly two minutes, the player can feed on the corpses of its victims in order to remain in Beast Form. This however can be a problem if fighting enemies whose corpses cannot be fed on.

The Ring of Hircine[edit | edit source]

The fleshspells in the magic tree of Alteration like Oakflesh can be used before entering Beast Form to get more armor as the armor effects carry over. The perk from the alteration tree that gives magic resistance and magic absorbance is also kept while entering Beast Form.

The Totems of Hircine are totems that can change the different powers that are initiated by the shout button in Beast Form. These can be found by doing radiant companions quests for Aela the Huntress and eventually a quest will be given to you by Aela to retrieve a Totem of Hircine from a radiant location. Upon retrieving it and giving it to Aela she will take it from you and place it in the Underforge where you can activate to change your Beast Form powers. There are a total of three Totems of Hircine.

Before you begin your next Beast Form rampage, you might want to consider some of these warnings:

Upon downloading the DLC, Werewolves will gain a perk tree to increase their power with 11 perks in total. Four of these perks require the Totems of Hircine to function though if none are obtained or changed the perk Totem of Terror will still function as you use the howl as a special attack.