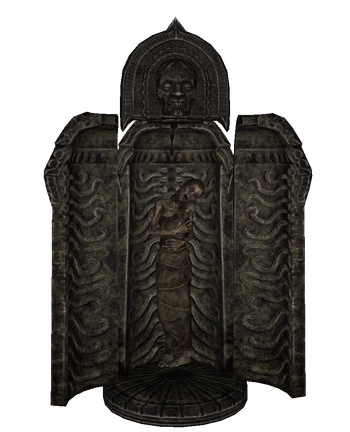 Historically, the Night Mother was a Dunmer woman who was blessed with five children by Sithis himself, by mystical means. As a twisted act of worship, she slew all five of them to send them to Sithis to dwell in the Void. For this, she was lynched by the townspeople. As a spirit entity, she is imperious, cruel, very far-sighted and conniving. She is the only direct link between Sithis and his servants in the mortal realm.

In dire times when there is no sitting Listener, the Night Mother inures her dark will in a trustworthy member who then becomes her Keeper. This individual then protects her unhallowed remains until her casket is safe and a Listener is appointed.