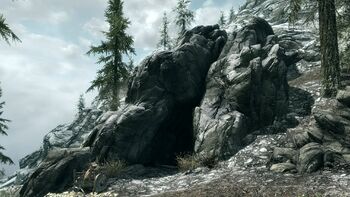 Tolvald's Cave is a cave located north-east of Shor's Stone and south-east of Ansilvund. Just inside the cave entrance are the remains of a hunters' camp with three bed rolls, an Iron Ore Vein and a Silver Ore Vein. Near the former cooking area is a small stool with the Hunter's Journal on it. One may stumble into a few Frost Trolls.

Spread out over all the caves, a huge amount of Glowing Mushrooms (×213) are available for harvest, and many other mushrooms too. Also egg sacs, yielding Chaurus Eggs (×225) are abundant.

Farther in, there are indications that the cave connects to a Dwemer ruin inhabited by Falmer. In a seemingly dead end chamber, that will open up in two directions piece of Gold Ore can be found. There is also an alchemy lab and two tanning racks.

This area contains more Falmer as well as some Chaurus, Skeevers, and Frostbite Spiders. In the chaurus pen, there is a Quicksilver Ore Vein.

This is where the Dragonborn can find a Moonstone Ore Vein, another tanning rack, two hay piles. The area also contains quite a number of books (×13), most notably, a Faded Diary, a Ruined Trailbook and a Tattered Journal. There are also copies of Battle of Red Mountain and Short History of Morrowind.

In the south-east a new cave will open up during No Stone Unturned containing the Crown of Barenziah. A Dunmer Ghost is standing next to the crown, but does not react to the Dragonborn.