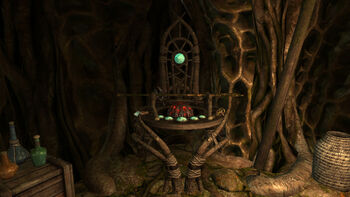 Tel Mithryn is the main building in the settlement of the same name. It is a Telvanni tower resembling a large mushroom which contains Neloth's laboratory.

The lab features a magicka-driven elevator.

Initially, this room is locked and inaccessible, but after the successful completion of Reluctant Steward, the Dragonborn receives a key to the room.

Inside is Neloth's Staff Enchanter that for the first time lets the Dragonborn enchant blank (unenchanted) staves that can be bought from Neloth.

The Black Book: The Hidden Twilight can be read in this room as well.