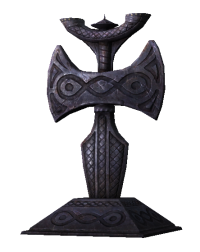 Talos is one of the Aedra, or Divines, though not recognised by the Aldmeri Dominion. Talos is the hero-god of mankind. His worship is currently banned by the Empire, but that hasn't stopped the Nords of Skyrim from revering him.

Talos is unique among the Nine Divines as he was originally Human, specifically a Nord known as Talos Stormcloud. Among the people of Cyrodiil he became known as Tiber Septim, and with their help forged the united Empire of Tamriel.

The Thalmor of the Aldmeri Dominion in particular resent the presence of a Human in the common religious pantheon of Tamriel as an affront to their standing as the most ancient of all peoples on Nirn, and the fact that the pantheon is developed from their own ancient belief system.