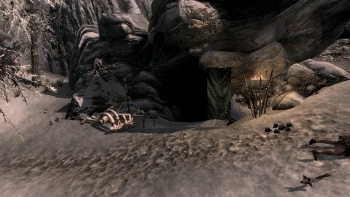 Southfringe Sanctum is located in the mountains south-east of Helgen. It is the home of the orc mage Bashnag and his coven of spellswords. There are also a number of frostbite spiders (including one giant one) and a fox named "Pumpkin" and a possibly resurrected and subsequently killed chicken (only an ash pile remains).

Outside the cave entrance is an alchemy lab, with a second lab farther inside. Also inside are an arcane enchanter and an anvil. There is also a copy of the skill book The Art of War Magic.

A thorough investigation of the cave will also reveal a Dunmer necromancer named Selveni Nethri who is trapped in a web. The Dragonborn can choose to help her escape.

This is one of the locations Urag gro-Shub can send the Dragonborn to retrieve one of his lost books. The actual book found there varies, but is always located in a chest near Bashnag.