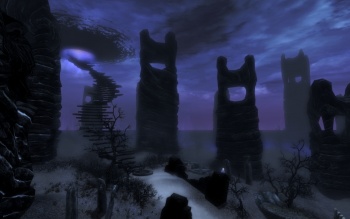 Stairs leading into the Soul Cairn 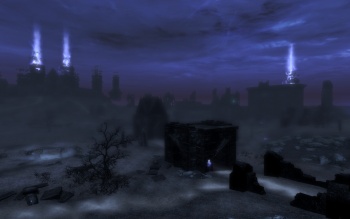 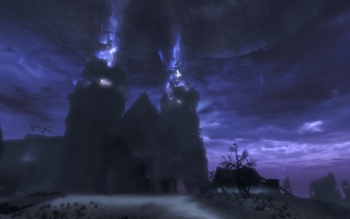 The entrance to the Boneyard 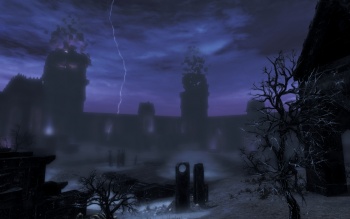 The Soul Cairn is a mystical location on a plane of Oblivion where disrupted or otherwise cursed souls often find themselves trapped. They may have been cursed by a magically powerful being, or indeed a daedra lord, or sent there after being disrupted in the process of being trapped in a Soul Gem and their energy thereafter consumed in its use. The latter possibility is offered by arcane theorists who insist that souls trapped in Soul Gems that are later expended are never truly destroyed.

The Soul Cairn is defended by undead who are controlled by elder spirit beings known as the Ideal Masters. These undead, similar to draugr, are known as Bonemen. There are several giant-sized, Dragonplate Armor-plated warriors overlooking the Cairn known as Boneyard Keepers. When any of these undead are slain, all that remains seems to be a black, liquid puddle.

Also inhabiting the Soul Cairn are the countless souls that arrive there and remain, apparently forever trapped.

Strewn all over the place are Soul Husks (×300+), that initially seem to be of no real value, other than to the merchant soul of Morven Stroud who will trade them in for various armour and weapons. Valerica can turn them into potions.

Several gates can be unlocked by shooting arrows at stones with round holes containing glowing blueish spheres. A few Lightning Rods (×3; e.g. east of portal) will let the Dragonborn place a grand or greater soul gem in them and turn it into a Black Soul Gem.

Following the main path north-east of the portal, the entrance to the Boneyard and Valerica can be found. The dragon Durnehviir has to be faced inside this yard. And here the Elder Scroll (Blood) can be found.

Leaving the yard, Durnehviir will reappear and offer to teach a new shout: Summon Durnehviir.

This enclosed ruin is located to the south-west of the Boneyard entrance. It features a Reaper Shard Receptacle where Reaper Gem Fragments (three in total) can be placed to summon the Reaper.