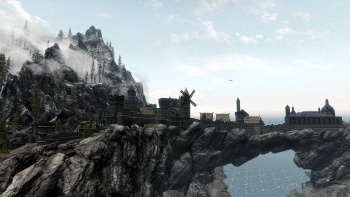 Solitude is the capital of Haafingar and one of the most influential and wealthy cities in Skyrim, a rival of Windhelm. It is located in Northwestern Skyrim and is a major shipping port and an important Imperial supply line.

The city of Solitude is first mentioned by Hadvar during the "Unbound" quest, if the Dragonborn sides with the Imperials. Hadvar suggests that the Dragonborn head for Solitude to formally join the Imperial Legion and help crush the Stormcloak rebellion. The Imperials are headquartered in Castle Dour and their leader, General Tullius and his right hand, Legate Rikke are both there.

Interestingly even though the residential quarters in the south-east of the city are very expensive, potatoes (×3) and leeks (×4) are still being grown there.