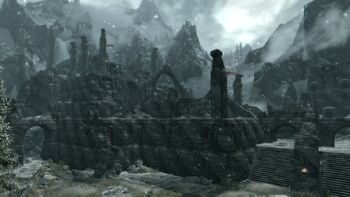 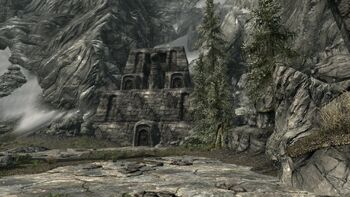 Skuldafn is a Nordic ruin that can only be reached with the help of Odahviing. It is also the location of the portal to Sovngarde. Many powerful draugr will stand in the Dragonborn's path.

This structure is set completely apart from the rest of Skuldafn. It contains several draugr and random loot.

Another such structure is the northern tower.

This is where you encounter not only many draugr and several Frostbite Spiders, but a Dragon Priest with a Diamond Claw. A word wall for the shout Stormcall is nearby.

Finally confront another such priest named Nahkriin. The latter must be defeated, for his staff opens the the portal to Sovngarde. His mask should also be of interest.

In the temple a room with three pillars requires two proper combinations. The solution can be found in the plaques placed above the pillars.

The left door continues deeper into the temple:

Further into the temple, another set of pillars requires a combination:

To open the massive stone gate use the Diamond Claw, with this combination (outer to inner ring):

Outside and on top of Temple: