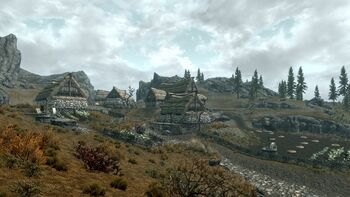 Rorikstead is a small settlement and is part of the Hold of Whiterun and as such is patrolled by Whiterun Guards. It is the furthest settlement from Whiterun along western border near The Reach. The stead was founded by Rorik, a former soldier in the Imperial Army, after he was severely wounded in battle. The settlement consists of two cottages, an inn and a manor.

The Frostfruit Inn is run by Mralki, another former soldier, and his son Erik. Rorik's Manor is inhabited by Rorik and Jouane Manette, a healer who saved Rorik's life during the war.

The town is mentioned in the bard's song "Ragnar the Red".