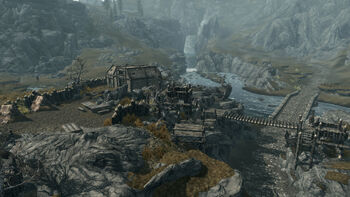 Robber's Gorge is a bandit camp which blocks the road north of the bridge over the River Hjaal to the south-west of Morthal along the river. It is also one of the possible locations of Kharjo's Moon Amulet. As the name suggests is it overrun with bandits.

Robber's Cove is a cave under the camp. It appears uninhabited but there is a table with the Bandit Leader's Journal on it and some loot. It also provides an exit to the camp. The Bandit Chief's Journal in the cave describes the location of an additional chest on an island to the south of the fort.