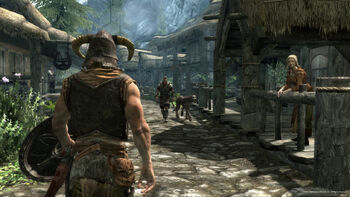 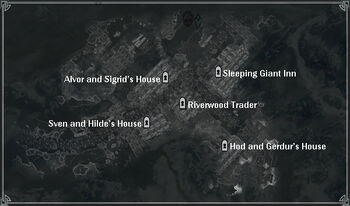 If you followed Ralof during the Unbound quest. You are requested to go to Riverwood and talk to his sister Gerdur. If you followed Hadvar, then it is Alvor that you must speak with.

Riverwood is one of the first villages that the player can encounter as it is very close to the exit point of the introductory quest line. It is a logging town located around forests and rivers.

The town itself is fairly small but it contains everything you need including a blacksmith, a tavern Sleeping Giant Inn, a general store Riverwood Trader, and other ways to have fun and make a little money in the process.

When the player first arrives at Riverwood, there are no guards. Instead, if a player gains a bounty the townsfolk will take matters into their own hands and attack the player. Later three guards from Whiterun will arrive and will act as normal. The guard's camp is a neat way to get some free rest.

There are numerous quests that can be found in Riverwood or involve going to the town, most involve getting comfortable with the various paths you can take in the game.