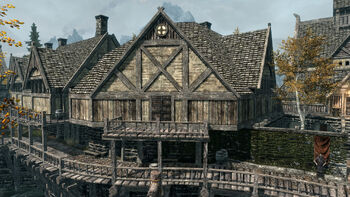 Riftweald Manor is Mercer Frey's residence in Riften. The front and back entrances bear the "Guild shadowmark".

Note: Access to the manor only becomes available with The Pursuit.

On the ground floor there is a "suspicious cupboard" which is in fact a secret passage leading to a series of underground tunnels and Mercer's secret room. A note, To The Owner, reveals structural work on the house, and a Shopping List adds some flavour.

In the room there are Mercer's Plans, the Bust of the Gray Fox, a weapon case which holds Chillrend, and a mysterious note Many Thanks. Beyond this room there is also an exit to the Ratway Vaults which bears the "Danger shadowmark".