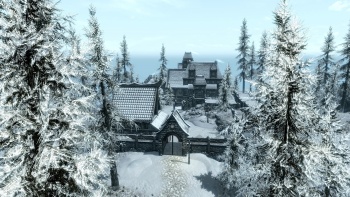 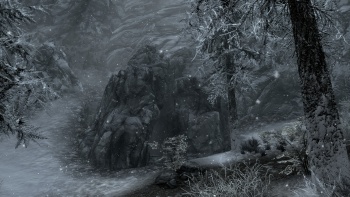 This compound of well-built, highly secure buildings exists in the extreme north-west region of Skyrim, north-west of Solitude. Here, the Thalmor entertain wealthy and influential guests as well as control intelligence operations throughout Skyrim. They also have a dungeon complete with torture apparatus, where they collect information from prisoners.

Two Thalmor Soldiers and two Wizards take up the premises. A lot of food and five beds make life for the guards nicer. The barracks are only accessible after finishing Diplomatic Immunity, though.

Where the party takes place.

This is where the Dragonborn can find some interesting dossiers as well as a Stone of Barenziah (if the stone is not there, it will be in the Reeking Cave).

Also known as the Interrogation Chamber. This is where the prisoner, Etienne Rarnis is found. There is also a trap door leading to the Reeking Cave.

The Reeking Cave is accessed from inside the Thalmor embassy via a trap door in the dungeon. The cave leads to the road west-north-west of the embassy. If there was no Stone of Barenziah in Elenwen's Solar, it will be in this cave. The cave can be entered via a gap in the rock just east of the Ironback Hideout, though that will dead end in the cave. The Unusual Gem can be found next to the body of a conjurer who was probably killed by the Frost Troll living here.