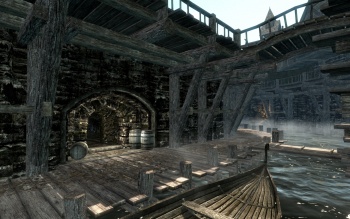 The Ratway is a network of sewers beneath the city of Riften. The entrance to the Ratway can be accessed through a door located on the lower concourse of Riften, along the canal. Just inside are two Nords, Drahff and Hewnon Black-Skeever, who are plotting to overthrow the Thieves' Guild. Further inside is Gian the Fist. In his area, there are a number of bear traps as well as an alchemy lab and a cooking pot.

The Thieves' Guild operates out of The Ragged Flagon located within the Ratway. Bandits and beggars roam its passages, hostile to anyone that disturbs them.

The Vaults are directly accessible from a door at the back of the Ragged Flagon. This dungeon is populated mostly by lowlifes, vagrants and beggars who have found their way down here and will attack anyone intruding on their territory. There is an anvil and a workbench in the area, as well as a locked chest containing Dravin's Bow.

This section is part of the quest A Cornered Rat and it is here that you will find Esbern who is being hunted by the Thalmor.

Esbern's room in the Warrens: