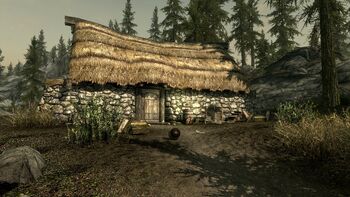 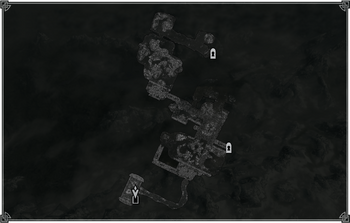 At first glance, Pinewatch just appears to be a small cabin with wood chopping block, a small garden of leeks and potatoes. But there is a large underground complex, accessible from the cellar, guarded by a lone bandit. Also in the cellar are two Sabre Cat Pelts, a cooking pot, a bed and The Song of Pelinal, v8. Along the wall facing the fireplace is a bookcase, and immediately to the right of that bookcase is a button which causes the bookcase to swing out revealing the cave system (a Note to Rhorlak hints at the passage). And the Warning note does not bode well for trespassers.

An Unusual Gem can be found on a bookshelf behind a locked door in this area with five dead draugrs.

This is a small room which is hidden behind a master-level locked door (but a key can be obtained from Rigel Strong-Arm).