From Skyrim Wiki
(Redirected from Padomay)
Jump to: navigation, search 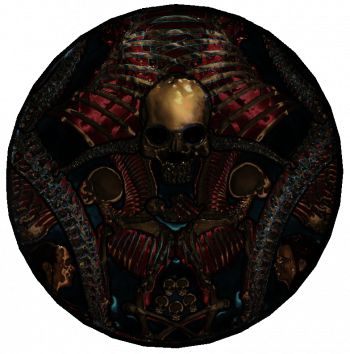 Mortals often represent Sithis as a skeletal being, to signifiy His relationship to death. In truth, the Dread Lord is formless, and infinite as the Void.

Sithis, sometimes known as Padomay, is the representation of the primordial chaotic force that existed before all creation, the opposing force being Anu. There are as many theories that try to define what Sithis is as there are representations of its form. Sithis is the patron of the Dark Brotherhood alongside the Night Mother. They maintain that Sithis is not a Daedra, but something more instead.

According to the scarce literature that can be found on the subject, Sithis is considered to be the original creative force of existence, preceding the Aedra and Daedra. He resents them powerfully for usurping his creation and works to destroy what he considers a travesty of his own work. To this end, he bestows his gifts on entities such as the Dark Brotherhood, because through murder and mayhem they do his will.