From Skyrim Wiki
(Redirected from Ohmes-raht)
Jump to: navigation, search

Hailing from the province of Elsweyr, they are intelligent, quick, and agile. They make excellent thieves due to their natural stealthiness. All Khajiit can see in the dark at will and have unarmed claw attacks. 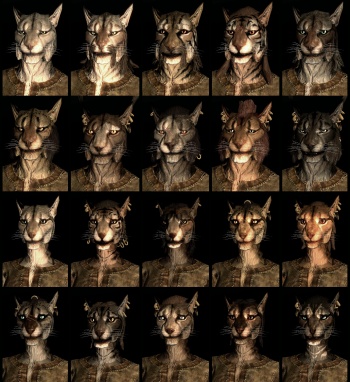 Khajiit are one of the ten playable races in The Elder Scrolls V: Skyrim. They are an intelligent, feline race and are well known for their natural prowess in agility and stealth. This makes them excellent thieves.

The Khajiit race has several different, very distinctive sub-types, all of which look very different from each other yet still very Feline in appearance. Each Khajiit is unique in appearance as the determining factor of their appearance is not their ancestors, but the phase of the Moon was at the time of birth of the particular Khajiit. The location of the moon is also said to determine the Primary form of the Khajiit, whether it is to look more Feline, or Human. Some scholars have claimed as many as twenty different breeds, but only seventeen have been identified and named to date.

Outside of Elsweyr, only one or two subtypes of Khajiit are typically seen in a given area. The Ohmes-raht make up most of the Khajiit in the areas which are more populated by humans, such as Cyrodiil and High Rock. They strongly resemble humans, albeit with light fur and a distinct tail. A lesser subtype, the Ohmes, appear almost identical to Bosmer. Those who live on the outskirts of Elsweyr and outside of the region often tattoo their faces to distinguish themselves as much as possible from the Mer. The Suthay-raht, and their smaller cousins the Suthay, are more feline, however they are still distinctive humanoids. They have more variety in their fur and facial features, and make up most of the Khajiit which can be found in Morrowind.

Visitors and likely intruders to Elsweyr often encounter the Cathay and Cathay-raht, which are often described as "jaguar men". These are particularly feline looking creatures, and are much stronger and faster than Humans or Mer. The popular fictional series "A Dance in Fire" depicts multiple encounters with these Khajiit. These particular Khajiit are known to make up most of the Khajiiti army and defence forces. They are described as having "pointed ears, wide yellow eyes, mottled pied fur and a tail like a whip", they also have very limited speech. The fourth and final bipedal form are the Tojay and Tojay-raht, but very little is known of them, as they tend to live deep in the southern marshes and forests, away from civilization.

Of the quadrupedal forms of Khajiit, the most well known is the Senche, These particular Khajiit highly resemble tigers that are roughly the same height as Humans and Senche-raht, which are nearly twice as large. Although they are not known to speak, they are said to be as intelligent as any other Khajiit, and are used frequently as battle mounts by the Cathay. The Alfiq and Alfiq-raht are the closest in resemblance to domesticated cats, but still intelligent enough to understand human speech. Other known forms of Khajiit include the Pahmar/Pahmar-raht and Dagi/Dagi-raht, whose appearance is said to be somewhere between a house cat and tiger, but little else is known about them.

The Khajiiti religion is quite different from the religion of Men or Mer, is still clearly derived from the old Aldmeri pantheon. The Khajiiti creation myth begins with the original litter mates, Ahnurr and Fadomai (Anu and Padomai). Ahnurr and Fadomai then gave birth to the Khajiiti Pantheon which very closely parallels the pantheons of Men and Mer: Khenarthi (Kynareth), Alkosh the first cat (Akatosh), Mara, the Mother cat, S'rendarr (Stendarr), and Magrus (Magnus). A litter of more children followed soon after, including Merrunz (Mehrunes Dagon), Mafala (Mephala), and Sangiin (Sanguine). Ahnurr had stated that he did not want anymore children, but Fadomai was presuaded by her elder children to give birth to one more litter of kittens, this final group contained Azurah and Nirni. After this happened, Ahnurr became very angry with Fadomai, who fled to the Great Darkness, and gave birth one last child which she named Lorkhaj. Fadomai knew she was dying, her life having been drained after birthing so many children, but she gave Nirni the gift of being able to birth children of her own.

Nirni approached Lorkhaj, asking him to build a home for her children to live. He did this, but by doing so he also tricked his siblings by forming the mortal plane and therefore trapping many of them there with him. Most of Fadomai's first litter were trapped within the mortal plane, while her second litter saw the danger and fled so that they would not become trapped also. Nirni gave birth to many children, among the various human and mer races of Tamriel. However, one of Fadomai's children, Azurah, had also been given a gift by their mother, She was given permission to take one of Nirni's children, and reshape them to her own liking, under the condition that she created the fastest, cleverest, and most beautiful of all creatures. Azurah chose a small number of Fadomai's children whom lived within the forest, and hence created the Khajiit. Nirni was furious at the creation of the Khajiit, and requested that her sibling Y'ffer punish the Khajiit. Y'ffer did this by turning their grasslands into a dry desert, and their forests into poisonous marshes of wasteland. The Khajiit, were protected by Azurah who taught them the secrets of the Moons (the Lunar Lattice in Khajiiti terms), and how to shapeshift in different situations in order to survive. The children who stayed true to their mother, Nirni and stayed within the forest, were turned into the Bosmer, and given the lush forests of Valenwood as their home.

There is no evidence as to how accurate this creation Myth is, however there is speculation. What is known is that Khajiit were currently living on Tamriel when the Ayleid discovered and explored the area, This was presumably long before there was any established kingdom of the Bosmer. What is not known about the Khajiit, is how long they were living in the region, or how many other Meri expeditions landed on Tamriel before the immigration of the Aldmeri (evidence suggests at least one other mass immigration of elves to Tamriel, resulting in the Dwemer of Morrowind). There are some theories by Imperial scholars which believe that the Khajiit evolved naturally from non-sentient cats, much like they believe the Argonians evolved from non-sentient lizards. The Khajiit were described by the Topal as two and four legged cats with only very primitive behaviour, with no clear signs of intelligence. However, the Ayleid legend tells the story of the bartering ownership of the forests of Cyrodiil from the Khajiit in exchange for the secrets of Literacy. Early within the first Era, Pelinal Whitestrake, claims to have fought and killed thousands of organized sentient Khajiit warriors, having believed that they belonged to the Aldmeri.

Tamriel was inhabited by the Argonians as well as the Khajiit, a long time before the Elves arrived. Torval the Pilot, also founder of the Ayleid empire is often described an intelligent, if primitive, race of cat-people whom inhabit the forests around Lake Rumare were inhabiting the area when he arrived there with his expedition. The Humans and Elves forced the 'Beast' races of the Empire into the southern extremes of Tamriel, into the forests and marhses that humans considered uninhabitable. The Khajiit existed in sixteen small nations, until around 1E700 when the Thressian Plague was finally eradicated. The sixteen nations formed into two states — Anequina and Pelletine — that would be rivals for almost 2000 years. It was not until 2E309 that the two nations were united, when a political marriage between the nobility of both countries occurred. There were major class wars until the Mane put a stop to them. The Cyrodiilic Empire began making diplomatic overtures with Elsweyr once the region stabilized, which helped set the stage for the formation of the Third Empire.

Large, permanent cities have been erected along the trade routes within the southern regions of Elsweyr, giving a rather Imperial feel to the region. The cities have been known to move around quite a lot, however they only seem to move around within a small region in the Jungles, very close to the river basins. Elsweyr's main source of income is that of their export of Moon Sugar, which is used to make Skooma which is a highly addictive drug. A large number of the Khajiiti race within the southern areas of Skyrim are commonly known as "Sugar tooths", which is a slang term for an addict to Skooma. However, The Khajiit seem to cope better whilst under the influence of the drug than any other Race. Saltrice, a local grain plant, is commonly grown within the fertile areas near the rivers of Southern Skyrim, as well as other crops. However, the saltrice makes up a large portion of the legal trade. The northern Khajiiti regions are still made up of mostly dry grassland and the Khajiit which reside there rarely consider themselves united in a way like the southern Khajiit do, this is suspected to be because the southern Khajiit seem not to have progressed much from their Tribal origins.

Each mother from each Clan of Tribes are members of the Khajiiti government and hold quite a lot of power within the Region mainly because they have huge amounts of control over the Moon Sugar harvests within the Khajiiti region, however they also maintain quite a bit of hierarchical power. The "Mane" is a unique type of Khajiit which is the nominal leader of the Khajiiji region. Khajiit legend claims that it is only possible for one Mane to live at a time, and his birth is triggered by the birth of a newborn Khajiit when the two moons have fully aligned in the sky. The Mane, whilst also being a huge religious leader for the Khajiit, is said to be bipedal, and also has the power of speech, however does not fall into any of the sub-categories for the Khajiiti race and is purely a unique being. The Mane is said to be the ultimate power within Elsweyr and is purely responsible for the success of the unification between regions within the Second Era.

The Argonians and the Khajiit are not considered any more than Beasts (sometimes referred to as the 'Beast Races') within the Mer and Human cultures. The Khajiit and the Argonians were enslaved by rich families and primary industries within Morrowind until very recently when King Helseth outlawed Slavery and made it illegal within the Morrowind region. They also have a strong racial dislike for Argonians (one which is shared in return), which causes tension in the southern Cyrodiilic cities of Leyawiin and Bravil, where Elsweyr and Black Marsh are both fairly close, and which have strong populations of both races.

Some of the Khajiit much prefer hand made weapons instead of their natural weapon which is their claws, and make very skilled Thieves due to their naturally amazing Agility and Acrobatics abilities. There are many warriors among the Khajiit, although this is mainly true of the Cathay, and rarely among those found across Tamriel. In addition to their native quickness, Khajiit have developed a natural proficiency in stealth, and have the added benefit of naturally being able to see in the dark. The skills which the Khajiit possess, combined with the general tendency of humans and mer to look down upon the Khajiit as "Beasts", drives many Khajiit out of their home region which then become bandits or skilled thieves in different regions.