Citizens of Skryim, they are a tall and fair-haired people. Strong and hardy, Nords are famous for their resistance to cold and their talent as warriors.

Nords are 50% resistant to cold damage. They can use Battlecry to make their enemies flee, for a short time. 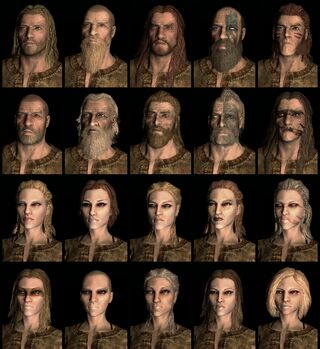 The Nords are well known within Skyrim for their incredible ability to resist both natural Cold and Magical frost. The Nords are also skilled warriors and behave as soldiers and mercenaries all over Tamriel. The Nords are always eager to put their combat skills to the test outside the traditional methods of Skyrim, and are proficient at all kinds of Combat and Warfare. Nords thrive within the cold areas of Skyrim, relative of their special abilities to withstand all manners of Cold and Frost, they are also seen as militant people by their neighbours. They are also Captains and Crew of the merchant fleets across many regions and may be found along most of Tamriel's coastlines, their role within the trades has benefited the Nords since the early days during which they have taken part in even the earliest trades and migrations across the sea from Atmora.

Nords translates to North, which is euphonious as the Nords come from the North of Skyrim. As a race, the Nords originated in the most northern place within the known world of Nirn, from a place that is commonly known by outsiders only as Atmora. Very little is known about the Nords, but what is known comes from old Elvish records which are known to refer to Atmora, and that it is likely that Atmora is a human corruption of this world.

Atmora had been extremely cold even since ancient times, it is thought that the continent is either warmer, or of a similar temperature to what it was like back in ancient times as the Nords who live there are extremely well suited to living within the freezing climate. It is said that during the time of the migration, a protracted and bloody civil war had gripped Atmora, and as the story goes, a man named Ysgramor rallied those people from all sides who desired to live in peace, after which he set sail to Skyrim to the south and to the extreme northern tip of the continent of Tamriel, at a place which is commonly known as Hsaarik Head. The new land Mereth was renamed in a tribute to the Aldmeri elves who used to populate the continent. Most stories about the continent give erroneous credit to Ysgramor, however, he and his colonists were the latest in a long line of emigrants from Atmora. Humans and Elves lived in peace and harmony for a very long time; however, racial tensions soon erupted between the two species and it wasn't long before there was conflict between the two.

The Elves soon figured that the race would surpass their culture if the Nords were left un-checked upon. Ysgramor and two of Saarthal's sons escaped to Atmora whilst Saarthal was burned. After this happened Ysgramor returned to Skyrim to exact his vengeance, bringing with him five hundred of his companions and followers. Upon their return to Tamriel, Ysgramor and his companions slaughtered the Elves who were living there and began the process through which the Elven population of Tamriel would be destroyed.

In 1E240, the process of expansion which is now known as the Skyrim Conquest was started by King Vrage the Gifted and began within the First Empire of the Nords. Over the course of approximately 50 years, northern Tamriel, Morrowind and most of High Rock were over-run and ruled by Skyrim. A few of the more ambitious leaders of the Nords had discussed attacking Northern Cyrodiil, however it was later concluded that the Jerall Mountains proved to be too big of a barrier, and the region was not worth the effort that it would take to infiltrate. In the centuries that followed, Skyrim expanded and contracted as battles were won and lost.

In 1E369, the last member of the Ysgramors, King Borgas was killed during the Wild Hunt whilst attempting to start the War of Succession within the region of Hammerfell and High Rock. Not only was King Borgas the last of the Ysgramor line, but this also saw the beginning of the decline of the Nordic Empire. The ruling council and Moot attempted to choose another king of Skyrim which should have been Jarl Hanse of Winterhold, however they were unable to do so, and the ensuing Civil War destroyed the Empire. The war came to an abrupt end in 1E420, and the Pact of Chieftains and the Empire lost all of their holdings within High Rock and Morrowind, and from then onwards, Skyrim was divided into several independent kingdoms. Finally, during the second era, and the Second Empire of Man under the Reman dynasty, one man begun to rule Skyrim.

Skyrim fit peacefully into the Empire of Tiber Septim, and the scars of the Battle of Sancre Tor and other battles and clashes were non-visible. Many Nords found employment in the Imperial Legion, as Tiber generally nurtured relations with the north.

Shortly after the founding of Skyrim by the Empire, the region was drawn into a series of conflicts for quite some time. One of these was the War of the Red Diamond when Skyrim sided with Queen Potema against the Empire. This started a Civil war which lasted seventeen years, until Potema was finally defeated. There continued to be a strong underground group called the Hörme which believed that Potema and her son of Uriel Septim III were the last of Tiber Septim's true blood and led raids against imperial forces from within the province. Over the years, Skyrim started many wars to expand its territory taking land considered to be "Skyrim ground", and therefore allowing the Nordic counts to occupy large portions of Eastern High Rock and Hammerfell.

The Fourth Era is the era in which The Elder Scrolls V: Skyrim is set.

There is a strong spiritual relationship between the Nords and the breath which is associated with the Sky Goddess known as Kyne and is extremely important. As Children of the Sky puts it:

Nords consider themselves to be the children of the sky. They call Skyrim the Throat of the World, because it is where the sky exhaled on the land and formed them. They see themselves as eternal outsiders and invaders, and even when they conquer and rule another people; they feel no kinship with them.

The breath and the voice are the vital essence of a Nord. When they defeat great enemies they take their tongues as trophies. These are woven into ropes and can hold speech like an enchantment. The power of a Nord can be articulated into a shout, like the kiai of an Akaviri swordsman. The strongest of their warriors are called "Tongues." When the Nords attack a city, they take no siege engines or cavalry; the Tongues form in a wedge in front of the gatehouse, and draw in breath. When the leader lets it out in a kiai, the doors are blown in, and the axemen rush into the city. Shouts can be used to sharpen blades or to strike enemies. A common effect is the shout that knocks an enemy back, or the power of command. A strong Nord can instill bravery in men with his battle-cry, or stop a charging warrior with a roar. The greatest of the Nords can call to specific people over hundreds of miles, and can move by casting a shout, appearing where it lands.

— Children of the Sky

Thu'um was once used as a weapon by the Nords, however the knowledge was lost and its use forbidden. The last man known to wield and use this power was Tiber Septim of the discredited school of Thu'um in the Imperial City. However, the ancient Greybeards can still be found at the top of the many steps leading to High Hrothgar, the birthplace of the Nordic race.

The religions of Skyrim are focused on the Aedra and their ancient ally, Lorkhan. This is similar for all of the races of Tamriel, with the exception of the Dunmer. The Nordic Akatosh is Alduin, a terrible, ravenous dragon who presides over the cycle of existence and devours the universe at intervals. The coming of Alduin is highly feared by all pious Nords. He is also worshipped as a God by the Altmer. More recently, it was shown that the traditional idea of Alduin could co-exist with the less adversarial Cyrodiilic interpretation of Akatosh, the Time Dragon. Followers of Kyne and Kynareth are very different in the sense that followers of Kyne are notably more aggressive and war-like than followers of Kynareth, who are nature lovers. Kyne is the true mother of the Nords even though Mara has assumed the role of the Mother Goddess. Kyne is also credited with sending her sons, Morihaus and perhaps Pelinal to the aid of the Cyro-Nordic slaves during their uprising. The most highly regarded Nord in Skyrim is the leader of the Pantheon, Lorkhan. Shor is widely regarded by the Nords as the King of the Gods, and champion of men in their battle against the Elves. It's said that he was brutally slain by "Elven Devils" but continues to bestow favor on his people by providing them with immortal Champions such as Ysmir, who is also a member of the Nordic Pantheon. Ysmir is the name which by which the Nords know the divinity of Talos.

Certain Daedra, such as the Hermaeus Mora can be found also within the Nordic Pantheon, and so is also noteworthy.

The isolated tribe commonly known as the Skaal tend to follow a very different kind of faith compared to their brothers on the mainland. Instead of regular religious worship, they venerate nature. The Skaal believe that the different parts of nature were created by different beings, for example; the Winds, the Trees and the Sun were created by the All-Maker, or so they were led to believe. For this reason, wolves and bears are especially sacred to the small tribe. It is vital to the Skall that all aspects of nature be in constant harmony, as they believe this is what imbues their people with their Shamanic powers, which are believed to have been given to them by the All-Maker, a benevolent, unknown being. As the Skaal delved further into their oral tradition, they discovered that the All-Maker was their version of the god Alduin. The Skaal were also famous for their legends about the Adversary, who was the enemy of mankind itself, and one of his aspects, the Greedy Man. As other tales show, the Greedy Man was none other than another incarnation of Lorkhan, but cast as a demon in these tales. The adversary of Lorkhan was Padomay, which, in Elven tales, had given birth to Lorkhan. In this regard, the religion of the Skaal was nearly the exact opposite of the pantheon of Skyrim. The Skaal were also well aware of the existence of the Daedric princes, however they did not worship them.