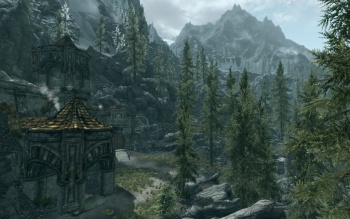 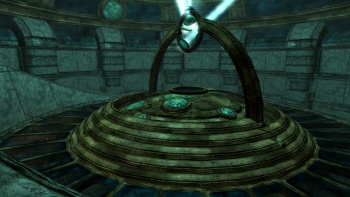 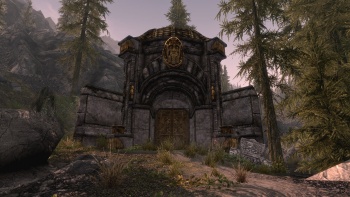 Mzulft is a dwarven ruin located south-east of Windhelm, near the eastern border of Skyrim, roughly halfway between Cragwallow Slope and Stony Creek Cave.

Passage beyond the inner main door is only possible after beginning the Revealing the Unseen quest. An expedition was mounted by the Synod to explore the ruins for clues to magical artefacts of great power, however, only one member of the expedition survives. It is also the location of a large Falmer den.

At the main gate of the complex a researcher of the Synod, Gavros Plinius, mention reaching Paratus Decimius is still at the Oculory. On his body a Mzulft Key allows access to the ruins, and a Research Log sheds some light on the goings on.

The main section of the city. Tunnels have been bored through the ruins where Falmer used to live. This area has been mostly cleared out by the Synod, only to have it reclaimed by the Dwarven Constructs (Spiders (×9) and Spheres (×4)) that protect the place. Some Chaurus (×3) have even made their homes in the tunnels. A convector can be found here as well, along with an alchemy lab.

This is where the Falmer (×10) and chaurus (×5) have the most hold. There are even more tunnels all over the place and this is where the chaurus nests are located. The constructs in this area have mostly been destroyed by the Falmer.

A few more Falmer (×4), a chaurus, and a Dwarven Centurion stand in the way of the Dragonborn in this part of the complex where the Oculory is located. It is a form of magical telescope that will show the locations of all artefacts of great magical power in Skyrim. However, the Oculory can still be overwhelmed by artefacts of unusually great magical power as demonstrated by the Eye of Magnus and Staff of Magnus.

Conveniently this area also has an exit to Skyrim, though there is nothing of note out here.

The Dwarven Storeroom is a separate area from the main Mzulft ruins. Inside are a number of pieces of Dwarven scrap metal and a convector.