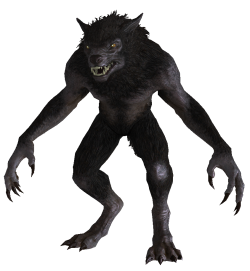 Lycanthropy is a disease that allows the player to become a werewolf.

There are two ways to acquire Lycanthropy in game:

Unlike Vampirism, NPCs do not react to you adversely when in normal form and you do not have to keep feeding on people to stay normal. You can only turn into a werewolf once a day. However, the Ring of Hircine that is obtained from the quest Ill Met by Moonlight allows you to transform as often as you like as long as it is equipped.

Transformation lasts for 2 minutes and 30 seconds. You can extend the time by 30 seconds for every corpse/carcass you feed on. While transformed, you are unable to communicate with anyone and should you transform within a city and are noticed, you will be given a bounty (1000

). Sometimes people may flee from you (includes your Companions) while others might try to take you on and attack you on sight.

You may only have either lycanthropy or vampirism.

In order to cure lycanthropy, you need to go to Ysgramor's Tomb with a head from a Glenmoril Witch and go to the brazier at the end. Once you do, toss the head into the blue flames and defeat the Spirit of the Beast that appears.

Warning: Once lycanthropy is cured, it is permanent and you cannot contract it again.

Update: If you have installed the Dawnguard DLC, this is no longer the case; Aela the Huntress, for example, will restore the gift if asked, after chiding the player for being 'fickle'.

The latter three abilities are only obtainable after obtaining Totems of Hircine for Aela. You may only have one of the latter three at any given time. They can be changed by worshipping at the relevant Werewolf Totem in the Underforge.