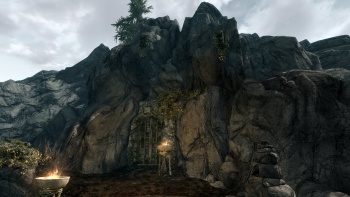 Liar's Retreat is a bandit tavern located in a cave in the hills south-west of Dragon Bridge. Not far away towards the river is the Reach Stormcloak Camp.

At some point in the recent past, the bandits appear to have decided to expand the premises and broke through a stone wall into an area occupied by Falmer (×14). The Falmer were the victors in that encounter and either killed or took prisoner all but one bandit who was barricaded in a room off the main hall.

In the Falmer area, there are also three Corundum Ore Veins.