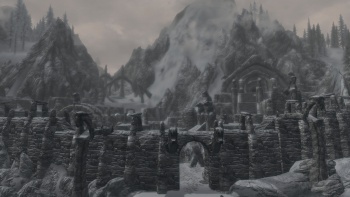 Labyrinthian is a sprawling Nordic ruin located to the west-north-west of Whiterun.

This main section, the Labyrinthian is only accessible when the player is on the quest The Staff of Magnus. This section can be accessed from a large main door or from a trap door atop a tower in the southern end of the ruins. This trapdoor is difficult to get to and leads directly to the final chamber, however it is barred from the other side.

As the Dragonborn enters, the ghosts of six mages, Atmah, Girduin, Savos, Hafnar, Takes-In-Light and Elvali, tell a story of overconfidence and an adventure gone horribly wrong, as one by one the members of the expedition die. One of the first obstacles is a very rare Skeletal Dragon with its contingent of Skeletons. Girduin becomes the first victim, but Savos is most adamant about pushing forwards. Note the first Etched Tablet.

This area is infested with draugrs, contains at least one Ebony Ore Vein, and in a side chamber the skeleton of a Novice Conjurer does not bode well. Here an alchemy lab and an arcane enchanter can be found. Near the exit of the Chasm a dead Argonian female lies next to treasure chest.

More powerful opponents await the ghost mages and the Dragonborn. Among them a draugr, several skeletons, three Wisps and a Wispmother, a Fire Spirit, quite unique spectral draugr and Spectral Warhounds.

Suddenly, grabbed from behind Elvali is lost to the mage expedition, but Savos urges them on.

After a word wall that yields a word of power for the shout Slow Time, the ghost mages left behind a female member of the group, Takes-In-Light who refused to continue onward.

Towards the end of the Tribune the Dragonborn encounters the Dragon Priest Morokei who kept in check by an energy field upheld by two Enthralled Wizards, apparently these are Atmah and Hafnar, abandoned by Savos who is sorry but sees it as the only way to keep the monster from escaping. Morokei wears one of nine very rare masks and (strangely) two Staves of Magnus.