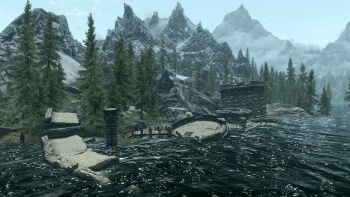 Ilinalta's Deep is a mostly submerged ruined fort located along the north shore of Lake Ilinalta. Inside are a number of hostile necromancers, their thralls, and skeletons. According to local legends, the place is cursed. Apparently the fort suddenly just sank into the water one day. There are tales of people going near the lake never to return.

There is also a Fisherman's Journal as well as copies of Breathing Water, The Doors of Oblivion, A Tragedy in Black and the The Amulet of Kings. There are also an arcane enchanter and an alchemy lab.

This is where the remains of Malyn Varen, his grimoire and the Broken Azura's Star can be found (only accessible when playing the below quest).