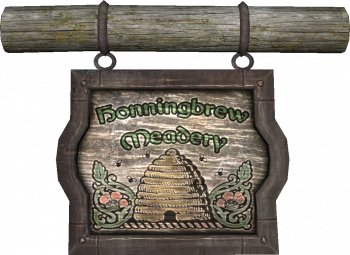 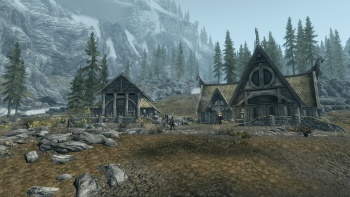 The Honningbrew Meadery: with the boilery (left) and the main building (right)

The Honningbrew Meadery, located to the south-east of Whiterun, is one of two meaderies in Skyrim, the other being the Black-Briar Meadery in Riften. Their main product is Honningbrew Mead. It is owned by Sabjorn.

The main building where the proprietor Sabjorn sells a few things, mostly mead, from behind the counter. His personal quarters on the upper floor yield a few items of interest.

The basement and the connected underground cave system require a key from Sabjorn that only becomes available during Dampened Spirits. Infested with skeever, four frostbite spiders and a particularly nasty breed of Venomfang Skeevers, bred by a madman mage called Hamelyn carrying a personal journal on his body. A skeever nest and an alchemy lab can also be found down in the dank caves.

The outbuilding containing the meadery's brewing vats requires another key and only becomes accessible during Dampened Spirits.