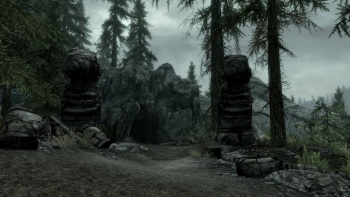 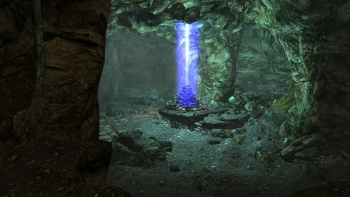 Halldir's Cairn is located just south of the Dark Brotherhood Sanctuary. Inside, there are numerous mushrooms and a strange cairn surrounded by dead bodies from which emanates a magic beam. Next to the pile of stones is a pedestal with Agrius's Journal and the Key to Halldir's Crypt.

The bodies are of Raen, Vidgrod and Agrius, three adventurers who took shelter in the cave after fleeing the Knifepoint Gang and were ultimately possessed by Halldir and induced to commit suicide.

Along the way through the cave, the Dragonborn is attacked by 10 subjugated ghosts and a few draugrs.