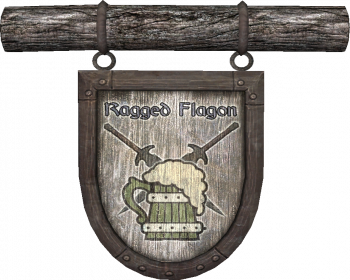 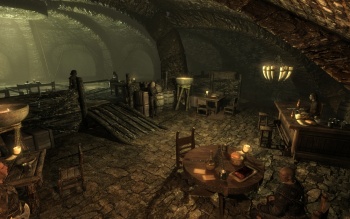 The Thieves' Guild is located in Riften. It can be access via the Ratway or by a secret entrance located in the Riften graveyard, inside the large tomb.

Initially most of the NPCs will be very tight-lipped, only after joining the Thieves' Guild will they become more amicable and provide various services like fence or training:

After guild starts to prosper:

Usually found in the cistern:

The Ragged Flagon is a pub located beneath Riften in the Ratway. It is used as a base of operations by the Thieves' Guild and used to be a bustling place of commerce when the Guild was in its heyday. It has since fallen into a bit of disrepair after the Guild started losing its fortunes.

The main area of the pub and where outsiders are allowed. There are four alcoves around the edge of the area that will be occupied by merchants as the Thieves Guild regains its former glory. Vex and Delvin Mallory can be found spending most of their time here along with Tonilia, Dirge, and Vekel the Man.

The Cistern is the main area of the Thieves' Guild. Only members are allowed in here. Access is through an easily missed door (through a storage cabinet) at the back of the pub. In here are the sleeping quarters, storage areas and training rooms, the latter features a note: Training Chests) of the guild.

The beds used by the members are arranged along the outer edge of the area, some members use wooden screens for some privacy. To the north-east, is a passage leading to a training room with some straw dummies and locked 'training' chests. Straight ahead (in the south-east) is the guild master's desk and the door to the Guild Vault requiring two of three keys to open. The vault only opens during The Pursuit.

The exit to the south-west leads to a secret entrance in the Riften graveyard. In the centre of the Cistern is a platform that is mainly used for officers of the Guild to discuss important matters.