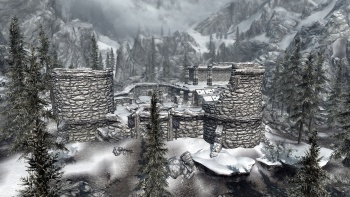 Fort Neugrad is a fort located on a small lake south-east of Helgen. It is initially the home of a hostile mage named Brandish and some bandits. Later, during the Civil War, Imperial troops move in.

From the top floor, there is a ladder leading to the top of a tower. Outside, there is a chest containing the Fort Neugrad Treasure Map.

This is where the Stormcloak prisoners are being held (only during the war). It can be access directly through the fort, or through a secret passage which begins underwater in the nearby lake.

Inside the Commander's Quarter is an Imperial Missive and a copy of An Explorer's Guide to Skyrim.