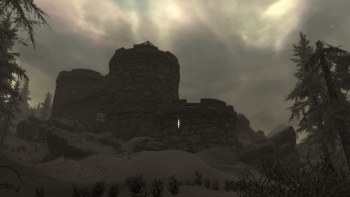 Fort Frostmoth is a fort located south-east of Raven Rock and to the north-east of Old Attius Farm in Solstheim.

This is from where General Falx Carius sends out his Ash Spawn minions to attack Raven Rock.

Exploring the fort the Dragonborn will come across Maximian Axius' skeleton, and Maximian's Knapsack containing: A Letter to Selina I, II and III, and nearby IV.

A coffin chamber in the north-west of the fort features Ildari's Journal and next to it a knapsack with the Fort Frostmoth Key, required to continue onward. To finally confront General Falx Carius who carries the Champion's Cudgel and another Fort Frostmoth Key.