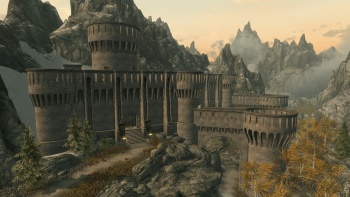 Fort Dawnguard was originally built as a prison for the vampire son of an ancient Jarl of Riften. This king was unable to kill his son but was determined to suppress the shame of his disease and keep his hold safe by imprisoning his son in this extensive mountain stronghold with the best mercenary fighters available. Eventually, they were forced to put him down in self-defence, for which they were punished by the Jarl with exile.

Now, the most committed vampire hunters in Tamriel are coming together to build a force that can thwart a scheming, powerful vampire lord who wants to use Elder Scrolls to take sunlight away from the world forever, giving free reign to his kind. These resistors are known as the Dawnguard, taking their very name from the castle and making it their base of operations.

Inside the fort are a smelter, a grindstone, a tanning rack, a workbench, a cooking spit as well as two copies of The Aetherium Wars. Later, after recruiting Gunmar and Sorine Jurard, an alchemy lab, an arcane enchanter and a forge are added.

In the north-easternmost part of the Fort is the entrance to a cave called Dead Drop Falls.

The fort is only reachable through a natural mountain underpass, and is located in Dayspring Canyon.