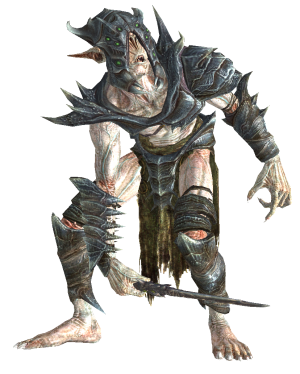 The Falmer, once known as the Snow Elves, are a race of Mer who lived in the province of Skyrim, in the north of Tamriel. The Falmer are twisted, evil creatures that dwell in Skyrim's deepest reaches. They have but one desire - to destroy the surface world, and any who dwell above.

The great statue of Irkngthand is the only known visual representation of a Snow Elf, other than Snow Elves introduced in the Dawnguard DLC, before centuries of subterranean slavery twisted almost all of the race into the vile Falmer.

The Falmer used to be a race of elves called the Snow Elves. However, war with the Nords during the first arrival of Nords in Skyrim caused them to retreat underground. They forged an uneasy alliance with the Dwemer, but were then betrayed and almost wiped out for unknown reasons. The Dwemer made them eat a blinding fungus as part of the agreement. Retreating further underground they eventually lost their eyesight and became the twisted creatures they are now. With a bitter resentment for all other races, the Falmer are a force to be reckoned with.

The Falmer were a proud people gifted with an unusually high affinity for magic. They had a strong resistance to frost, ice, and snow, as their skin was coated with a layer of pale-blue ice, which suited the harsh conditions of their native land perfectly. Nothing is known of their dwellings, and little is known about the way they lived. This is because the Falmer, like other elves, were notoriously private, and kept themselves to themselves; this has led to little being known about them or their way of life.

The Falmer were displaced from their homeland of Skyrim in the late Merethic Era, when the final wave of Nordic immigrants, led by Ysgramor, finally drove them out. However, it is believed that some tribes of Falmer may still inhabit remote parts of Skyrim.

In truth, surprising numbers of Falmer, both warriors and magic users, dwell in the depth of the majority of Dwemer ruins and in many natural underground caverns throughout Skyrim. They generally coexist with a sightless subterranean species known as the Chaurus. Apparently they have learned to train some of these creatures and fight alongside them. Besides this, the Falmer warriors are armed both as bowmen and for melee, and they have their own weapons technology, including armor and shields. Their helmets speak for their sightlessness as they have no apertures for eyes. Their magic users mainly use cold-based spells and sometimes fight in concert with a Dwarven Centurion.

Their living spaces resemble small, dark tents, and sometimes contain chests made from matching material, which may be made from the skin and bones of the Chaurus.

Only one, or at most several true Snow Elves remain, unaffected by the curse suffered by the Falmer. The one known surviving Snow Elf, Knight-Paladin Gelebor, refers to them as 'The Betrayed', in reference to the curse placed upon them by the treacherous Dwemer.