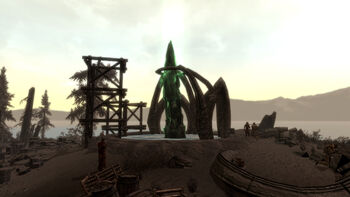 The Earth Stone is one of the All-Maker stones and is located on the tip of a small peninsula south-west of Raven Rock. Once cleansed, it gives the Dragonborn the power to ignore 80% of physical damage for 30 seconds. Each time this power is used, the Dragonborn must return to the Earth Stone to re-acquire it.

Several inhabitants of Raven Rock initially work on the stone at night in a hypnotic trance. Three of the town's Redoran Guards also permanently work at the stone.

Touching the Earth Stone temporarily puts the Dragonborn into a trance as well, working as a stone mason, movement will break the trance though. Something Neloth observes with interest.