Draugr are monsters within the game Skyrim. They are a type of undead that are often found in the Nordic Ruins. They "wake up" when the player enters their line of sight; or entering the rooms in which they are interred. They wield ancient Nordic weapons. They are immune to poison and have a frost resistance of 50%. They are susceptible to fire spells. 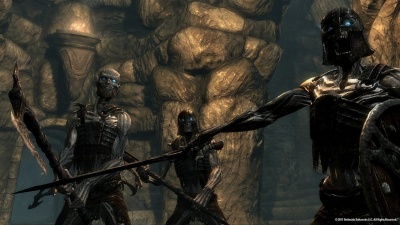 The most basic and common. Easily dispatched.

A tougher version of Draugr that are uncommon in earlier encounters, but appear with increasing frequency in higher-level encounters.

The toughest of the normal Draugr soldiers. Rarely encountered and always a danger to the unprepared. These draugr are usually more armoured than the weaker types. You can tell they are nearby if you hear something that sounds somewhat like Throw Voice. And they can also use some shouts such as Unrelenting Force.

Come in 5 varieties. In order of increasing toughness: Overlord, Wight Overlord, Scourge Lord, Deathlord, and Death Overlord. Note that there are two varieties of Death Overlord one higher levelled than the other.

These sometimes carry a Dented Iron Shield and were introduced with the Dragonborn DLC.