From Skyrim Wiki
(Redirected from Dragons)
Jump to: navigation, search

Dragons are a race from Akavir that were once very widespread throughout Tamriel. They are a large and powerful race, and although they seem like beasts, they are in fact intelligent and capable of language, both their own and others. They have been rendered almost extinct; however, dragons have recently resurfaced in Skyrim. Most Nords has assumed the dragons were only a legend until Alduin appeared and began raising them from their barrows.

Prior to the release of The Elder Scrolls V: Skyrim, Todd Howard said, "There [would be] an unlimited number of dragons".

Dragons play a large role in the legends and culture of Nirn beyond the continent of Akavir - for example, the symbol of the Septim Empire, as of the Third Era, is the Red Diamond, which is a red dragon shaped inside of a diamond. Additionally, the divine being Akatosh is associated with dragons, and his avatar takes on the form of a dragon. The Daedric prince Peryite's known form also appears as a dragon. In Morrowind, the dragons were driven out by the cliff racers, large flying creatures found throughout Morrowind which are very aggressive and will attack anyone in sight. Young dragons of an unknown type were known to come in conflict with the hero of Daggerfall around Iliac Bay. A type of creature called the Wamasus once inhabited Black Marsh; the Northmen thought these to be dragons with lightning for blood. 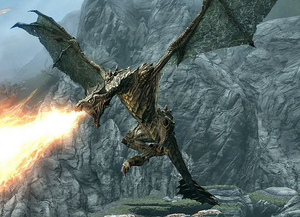 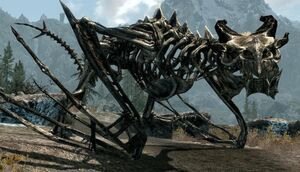 Ordinary dragons begin to appear in The Elder Scrolls V: Skyrim from the very beginning of the game, providing that the Dragon Rising quest has been completed. They are the the simplest type of dragons and can be brown, white or bronze in colour. Brown dragons can use both Fire or Frost based attacks. Bronze and white dragons use only Fire based attacks

Blood Dragons begin to appear in The Elder Scrolls V: Skyrim once the player reaches level 18. They can use both Fire or Frost based attacks. You will encounter them beginning at level 20.

Frost Dragons begin to appear in The Elder Scrolls V: Skyrim once the player reaches level 27. They use mainly Frost based attacks.

Elder Dragons begin to appear in The Elder Scrolls V: Skyrim once the player reaches level 36. Distinguished by their orange color, they can use either Yol (Fire) or Fo (Frost) attacks. Their tails can cause a powerful hit.

Ancient dragons begin to appear in The Elder Scrolls V: Skyrim after the emergence of Alduin. These dragons have an immense amount of health and can use either Yol (Fire) or Fo (Frost), same as the Elder Dragon. Just as Elder Dragons they can cause a powerful hit with their tails.

You can come across them after hitting level 45. Additionally, the heroic companion character, the horse Shadowmere, can be killed by Ancient Dragons using either element when she is trapped in very close quarters and is repeatedly attacked. These Dragons are the strongest in the vanilla game though the revered and legendary dragon from the Dawnguard DLC are tougher.

The Skeletal Dragon is a tough enemy that appears in Labyrinthian in the quest The Staff of Magnus. The only loot it drops are Dragon Bones, no Scales or Dragon Soul.

Revered Dragons were introduced in The Elder Scrolls V: Dawnguard. They have 50% Fire Resistance and are susceptible to Frost damage. In addition to fire and frost breath, they can use the Drain Vitality shout, letting them rapidly drain a victim's Health, Magicka, and Stamina.

Legendary Dragons were introduced in The Elder Scrolls V: Dawnguard. There are two varieties: one which uses Fire and has 50% Fire Resistance and is susceptible to Frost damage and a second which uses Frost and has 50% Frost Resistance and is susceptible to Fire damage. In addition to fire or frost breath, they can use the Drain Vitality shout, letting them rapidly drain a victim's Health, Magicka, and Stamina. They are the most dangerous Dragon in the game usurping the Ancient Dragon from vanilla.

Serpentine Dragons were introduced in The Elder Scrolls V: Dragonborn. They are only found on Solstheim and can breathe frost or fire. They are blue in color and the shape of their heads is unique, particularly their jaws. Their strength is similar to that of Elder and Ancient Dragons. One named Serpentine Dragon exists: Sahrotaar.

Whenever the Dragonborn kills a dragon, he/she absorbs its soul. These souls can be used to learn the words of power necessary for Shouts. Most dragons have souls although a few (usually regenerated dragons) don't these are the dragon's found at Dragon Lair's and were made so the player could not farm dragons from these sites.