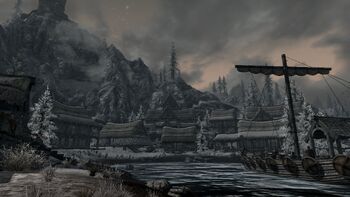 One of the oldest Holds, Dawnstar is a garrison town on the northern coast of Skyrim. It was after the destruction of a fortress in Dawnstar during 2E 283 that Potentate Versidue-Shaie declared martial law, leading to one of the most brutal and bloody periods in the history of Tamriel. Now, the harsh environment, rugged terrain, little sunshine and difficult access makes Dawnstar one of the least populated holds, though the town still has a few services.

Dawnstar is north of Whiterun between Solitude and west of Winterhold on Tamriel's northern coastline. Heading north on the road just east of Whiterun and take the west path at the fork in the road will lead to Dawnstar.

North of the town itself, and on the edge of water beneath a short cliff, is the entrance to an ancient, unused Sanctuary of the Dark Brotherhood.