Also known as "Dunmer" in their homeland of Morrowind, dark elves are noted for their stealth and magic skills. They are naturally resistant to fire and call upon their Ancestor's Wrath to surround themselves in fire. 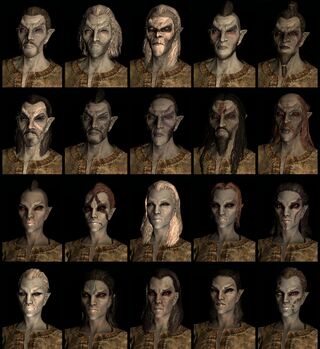 Dark Elves are one of the ten playable races in The Elder Scrolls V: Skyrim. It was voted as the most popular race.[1] In their homeland of Morrowind, dark elves are noted for their stealth and magic skills. They are naturally resistant to fire and can call upon their Ancestor's Wrath to surround themselves in fire. They also begin the game with Sparks. 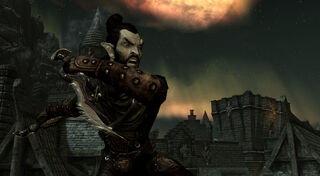 Dark Elves, or "Dunmer" as they are called in their homeland of Morrowind, are dark-skinned, red-eyed beings with a cruel and proud temperament. They are known to be intelligent as well as strong and agile. Female Dark Elves are known for their promiscuity. The combination of powerful intellect with a strong and agile physique produces superior warriors and sorcerers.

On the battlefield, Dark Elves are noted for their skill with a balanced integration of the sword, the bow and destruction magic. In character, they are grim, aloof, and reserved, as well as distrusting and disdainful of other races. 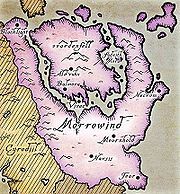 Dark Elves are that of their own and keep to themselves as they are very distrusting, and untrusted by other Races. They are often found in small groups, very proud creatures, ruthless and cruel. Female Elves, despite their superior Skills and Strengths, are well renowned for their promiscuity within the Race. However, those Dunmer which were born outside of Morrowind, or within the Imperial Tradition are usually much more friendly than their native counterparts.

The Dark Elves, were previously known as the Chimer, or "Changed Ones," due to their worship of the Daedra rather than the Aedra, who were worshipped by the Aldmer in Summerset Isle. They gained their dark skin after the Battle of Red Mountain, when they were cursed by the goddess Azura. The Battle of Red Mountain involved the murder of an ancient and respected hero known as Nerevar (the reincarnation of whom, dubbed the Nerevarine, the player assumes the role of in Morrowind in order to defeat Dagoth Ur). Nerevar was said to have been murdered by his own Tribunal, which also included Vivec, Sotha Sil, The Clockwork Sorcerer and his wife, Almalexia. According to Ashlander legend, these three supposedly killed Nerevar in an attempt to obtain immortal life and become the "Living Gods" within Morrowind.

Another version, endorsed by the Tribunal Temple, states that Nerevar died from wounds he received during battle—possibly with the Dwemer king, Dumac, against Dagoth Ur, the larger Battle at Red Mountain, or a combination of the three.

The battle at Red Mountain [2]