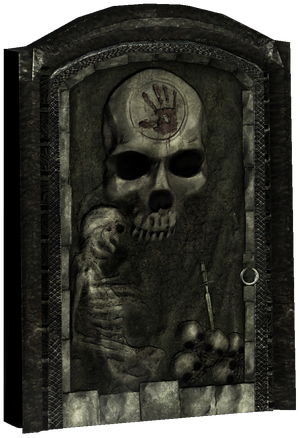 The Dark Brotherhood is an organization of assassins that operate throughout Tamriel. They are called upon by performing a ritual called the Black Sacrement. Thier base of operations in Skyrim is at the Dark Brotherhood Sanctuary near Falkreath.

The Brotherhood has been operating in Tamriel for centuries. They are very well known yet no one has ever infiltrated nor exposed them. Virtually every city in Tamriel has a bounty on members of the Brotherhood and would pay handsomely to see them gone. Historically, the Brotherhood has always worshipped Sithis, God of Entropy and Chaos alongside the Night Mother, who functions as a spiritual figurehead as well as the one who delivers jobs to the Brotherhood. 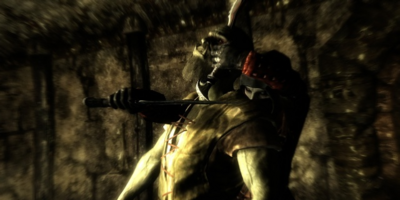 A Dark Brotherhood Assassin successfully killing an Orc from behind

The Brotherhood is lead by a Listener, who receives orders from The Night Mother and passes them on. In turn, the Listener is assisted by four Speakers, whose duty is to distribute the contracts obtained by the Listener from the Night Mother to the regular members.

However, there has not been a Listener or Speakers since the collapse of the Dark Brotherhood in Cyrodiil. The current Dark Brotherhood is led by Astrid. The Brotherhood has been forced to rely on traditional information gathering techniques to seek out people performing the Black Sacrament. Astrid is assisted by Nazir, who hands out the minor contracts to the other members.

There is a special position of Keeper who is in charge of caring for the corpse of the Night Mother when there is no Listener to do it. Such a position has not been used for a long time but it was reactivated after the loss of so many senior members of the Brotherhood. The current Keeper is Cicero.

To start the Brotherhood questline, you have to either listen to rumors in any inn around Skyrim until you hear of a boy, Aventus Aretino, in Windhelm trying to summon the Brotherhood, or overhear a conversation between a dunmer woman (Idesa Sadri) and a boy (Grimvar Cruel-Sea) just outside the Aretino Residence in Windhelm. The rumor can also be obtained directly from Idesa Sadri inside Candlehearth Hall, or by paying Maul in Riften for information. Whichever way you choose, go to Windhelm to begin the quest.

Go to the Aretino Residence and pick the front door (novice) to get in. Once inside head up the stairs and follow the sound of the voice to Aventus. Wait for him to finish the ritual and speak to him. Agree to his quest and head to Riften.

Once in Riften, go to Honorall Orphanage and find Grelod the Kind. It doesn't matter if you kill her in front of witnesses, no one will raise the alarm and you won't get a bounty. After you've done the deed, go back to Aventus who will thank you and reward you.

Wait around for some days until a Courier approaches you with a note that has a black handprint on it and "We know" written on it. Once you have the note, you can continue with the quest line.

After you get the note, just find a place to sleep and go to sleep; even sleeping for an hour will be enough. You will be woken up by Astrid in a shack somewhere in the wilderness. Speak to her and listen to what she has to say. At this point, you may choose to either join the Brotherhood or destroy it.

If you choose to join, just turn around and kill one of the tied up victims. It doesn't matter which. If you feel like it, you can speak to them first to find out why they think someone would want them dead. Once you've killed one or all of them, just speak to Astrid again and she will tell you to come to the Brotherhood Sanctuary.

When you reach the Sanctuary, Astrid will tell you to see Nazir for some work to do. Go to Nazir and he will give you the following contracts:

You must fulfill all contracts to continue.

Once you've done the contracts, you are told that Astrid wants to see you. Go and see her and she will send you to Muiri. Go to Markath to find Muiri and she will give you your first big job: Killing Alain Dufont. Muiri also gives you the optional objective of killing Nircine Shatter-Shield who is closeby. Whatever you choose to do, go to Raldbthar to find Alain.

There are guards on the outside and inside along with traps. You can find Alain a short way into the dungeon. So kill him and finish off the rest of the dungeon if you want to. Return to Muiri when you are done. She will tell you that Astrid wants to see you.

Whispers in the Dark[edit | edit source]

Go back to the Sanctuary and speak with Astrid. She will tell you that she is suspicious of Cicero because of his recent activities and ask you to go spy on him. Go to the Night Mother's coffin and pick the lock and climb inside. Wait while Cicero comes in and finishes talking. While he speaks, the Night Mother addresses you directly. Wait until she is done and report to Astrid and Cicero. Astrid will ask you to go do some more contracts while she thinks.

Once these are done, Astrid will want to speak with you again.

The Silence Has Been Broken[edit | edit source]

Astrid will tell you to go to Volunruud to meet with Amaund Motierre. Travel there to find Amaund and he will give you a list of people he wants killed along with an amulet as a 'contract fee'. Return to Astrid with the items and she will send you off to Delvin Mallory in Riften to get the amulet appraised. If you aren't a member of the Guild, you'll have to fight your way through the Ratway.

Meet Delvin and he'll identify the amulet and send you back to Astrid. Return to the Sanctuary and Astrid will tell you your first target.

Return to Nazir for the final contract:

Your first target is Vittoria Vici. Go to the Temple of the Divines in Solitude where she will be holding her wedding. You can kill her at any time, but you get a bonus if you get her while she is giving her wedding speech. When she is dead, Veezara will show up to provide a covering distraction for your getaway. Return to Astrid for the next task.

Now you have to kill Gaius Maro and frame him for a plot against the Emperor. First, you'll have to go to Dragon Bridge to get his travel schedule. Once you have it, just read it and check the current game time then head to the corresponding location. When you find him, kill him and plant the letter on him. Return to the Sanctuary and Astrid will tell you where to go next.

The Cure for Madness[edit | edit source]

While you were gone, it seems Cicero went axe crazy and started attacking Brotherhood members before fleeing. Astrid will tell you to search Cicero's quarters for a clue. You just have to bring her his Final Journal to continue. She will then lend you her horse for the pursuit. Go to the abandoned Dawnstar Sanctuary and enter in search of Cicero. When you find him, you will have a choice of either killing him or forgiving him. Whatever you choose, return to Astrid with the news to continue.

The next task will send you to Festus Krex who will provide you with instructions to find Anton Virane in Markarth. Go find Anton and get the information you need from him. Keep pushing him for information and intimidate him if you need to. Eventually you'll be given your next target Balagog gro-Nolob.

You can find Balagog at Nightgate Inn. Find him, kill him, loot him, and hide the body if you want for the bonus. Finish up and go back to Astrid for the next step.

To Kill an Empire[edit | edit source]

Head off to Solitude and look for Commander Maro. Show him the letter you looted from Balagog and he'll let you into the restricted area with instructions to find Gianna. Before speaking to her, pick up one of the chef's hats and equip it. Speak to her and tell her what to add to the meal for the Emperor. No matter what you do, you can't screw this up.

When you're done, follow Gianna as the meal is served to the Emperor. You might want to wait as close to the door opposite from where you entered as possible. When the Emperor finishes praising your meal, he will die. Quickly sneak out of the place from the door opposite your entrance during the uproar. Outside you will be confronted by Commander Maro. Quickly finish talking and escape the city ASAP. You'll get a massive bounty so the city guards will attack on sight. Head back to the Sanctuary.

You return to find the Sanctuary under attack. Assist whatever surviving members of the Brotherhood you can and make your way to the Night Mother's chamber. Kill off any remaining soldiers nearby and climb into the coffin. You will hear the sounds of battle. When the sounds die down, you will emerge and the Night Mother tells you to find Astrid. Go to her quarters and speak with her. At the end, kill Astrid and return to the Night Mother.

The Night Mother will tell you to go find Amaund, the one who gave you this contract in the first place. You can find him in Whiterun so head there to look for him. He will tell you that the real Emperor is at the Solitude docks preparing for departure aboard his ship. Go to Solitude and head to the docks.

Commander Maro and a guard will be standing outside. Kill them when there are no town guards nearby if you don't want a bounty. Once you're done with him, board the ship. There are several locked doors (master) between you and the Emperor. Captain Avidius and Lieutenant Salvarus have keys to the ship if you don't want to pick the locks.

Once you find the Emperor, he will ask you to let him say some last words. Whatever you do doesn't really affect the outcome so do as you please. When you're done go back to Amaund and he will tell you where your reward is. Once you've collected the reward, return to the Sanctuary and speak to Nazir to finish up.

At this point you get access to a few new quests to set the Brotherhood on the road to recovery.