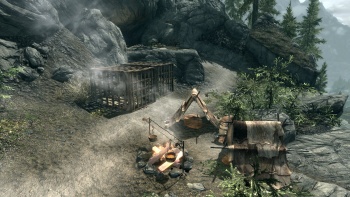 Cragslane Cavern is a small cave and bandit camp located north-north-east of Shor's Stone, almost due north of Shor's Watchtower, quite close to Ansilvund. It is used in the skooma trade. In the camp, outside the cave there is a tanning rack, a cooking pot, and two bed rolls.

It is also one of the possible locations of Kharjo's Moon Amulet.

The cave seems to be used as a gambler den, with a Barkeep, a Butcher, and several Gamblers, betting on Pit Wolf fights.