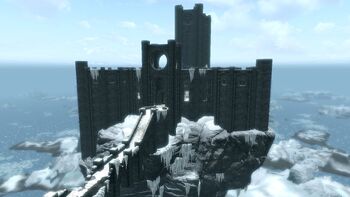 The College of Winterhold is located in the city of Winterhold and is a place in Skyrim for mages to gather to learn and do research. There is also a joinable faction by the same name. To enter, the Dragonborn must demonstrate some mastery of either magic or Dragon shouts.

Hall of the Elements[edit | edit source]

The library of the college. This area is overseen by Urag gro-Shub.

There are 28 book cases that require a key, another seven such book cases contain 17 books respectively, in the open another 71 books are available, though all are considered stealing.

Initially these are the quarters of Savos Aren, but later, the Dragonborn can become Arch-Mage of the college and take possession of the quarters after finishing the College of Winterhold quest line. This area includes a sleeping area with a bed, an alchemy lab, an arcane enchanter, a safe and a garden of ingredients. There is also a pair of shock resistance boots on the dresser next to the bed. And on a shelf another Unusual Gem can be found.

Mixed students' and instructors' quarters. On the lower level are the following rooms (beds ×6):

The instructors' quarters. There is also two alchemy labs and an arcane enchanter here. On the lower level are the rooms of the following instructors (beds ×4):

The Midden is a series of tunnels beneath the college, accessible from the main court yard and the Hall of Countenance hatches in the floor. It is there that four students went missing some months prior. The odd draugr and Ice Wraith can be encountered here.

Further in the Midden Dark features an alchemy lab and a Daedric Relic armoured hand. Nearby the Midden Incident Report and the Investigator's Key shed some light on the relic. A couple of skeletons and Frostbite Spiders may also roam the passages.

In the west of the cave system an ominous door requires a key.