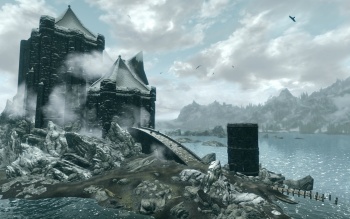 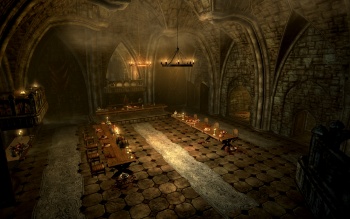 Castle Volkihar is the base of operations for the Volkihar Vampire Clan and the home of Lord Harkon. It is located on an island off the northern coast of Skyrim, west of Solitude and can only be reached by bridge or boat.

The keep is centred around the main dining hall, with the chalice chamber, a sword and bow training area with smithy to one side, and the library with alchemy lab and crypt with coffins to the other. At the far end a passage leads to the human cattle cells in the cellar, and up the stairs to the private chambers of Lord Harkon.

Up here a door leads to the Cathedral.

Later in the vampire quest line, another private chamber, presumably for Valerica, is made presentable, and the passage to the castle's courtyard garden is opened up.

It is here that the Dragonborn first learns about vampiric powers after receiving the "gift" from Lord Harkon. This is also the location of the final confrontation with the vampire lord.

Can only be accessed from outside the castle, via hidden dock, during Chasing Echoes. Death Hounds (×7), a few Skeever (×2), a Giant Frostbite Spider and a Skeleton await here. A Feral Vampire carries a Journal Fragment on his body. The path leads to the Volkihar Courtyard.

The courtyard becomes directly accessible from the keep's main hall after Lord Harkon is dead, by asking Garan Marethi to remove the rumble blocking the door to it. From here the towers (both have caved in) and the ruins can be explored.

Pretty much empty, except for a few gems.

Three skeletons and a gargoyle guard this dead end area.

The ruins become accessible after properly placing the crests in the moondial. The dusty hallways are infested with skeletons (×21) and gargoyles (×7). These eventually lead to Valerica's Study and the balcony.