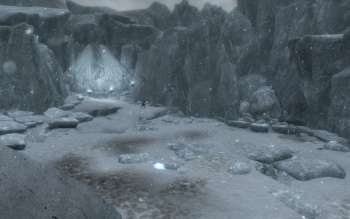 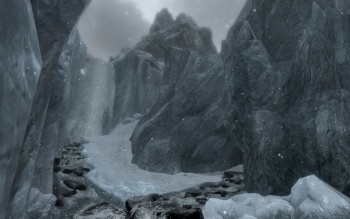 Castle Karstaag Caverns are located west-north-west of Saering's Watch, east of the Northshore Landing in the north-west of Solstheim. The caverns are inhabited by a large tribe of Rieklings.

The caverns are inhabited by many aggressive Rieklings (×15).

On an ice shelf in the water pool at the bottom of the cavern the dead body of Esmond Tyna can be found with the Bonemold Formula stolen from Glover Mallory and a Ebony Dagger of Terror on his body.

The courtyard can either be reached via the caverns or via the main gate requiring lockpicking. The large icy arena houses the Karstaag's Throne and may be the scene of an epic battle against Karstaag, should he be summoned with Karstaag's Skull. A few Rieklings (×2) will be about, and a Mounted Riekling carries the Castle Karstaag Key to unlock the main gate.

Entering the caverns from the courtyard: