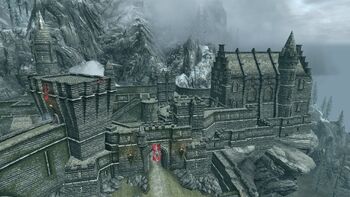 Castle Dour is the residence of the Emperor of Skyrim and the headquarters of the Imperial Legion. It is a large fortified structure which dominates the city of Solitude.

The main part of the dour, where the main strategic decisions are being made, concerning the Civil War by General Tullius.

Includes cells, including a Prisoner Belongings Chest and Evidence Chest. The southern cell features a Crumbling Mortar wall leading out to a secret passage exiting behind Angeline's Aromatics.

There is a female prisoner in one cell named Bjartur, interaction not normally possible.

Initially cannot be accessed, requiring a key for the main areas, though the back door on the upper floor opens one room.

Temple of the Divines[edit | edit source]

Off the main dour yard the Temple of the Divines opens up.

The location was suddenly abandoned by the Thalmor and they never returned. The main room features a strategic map though.