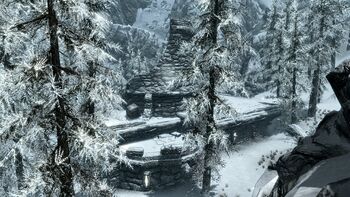 Bloodlet Throne is a fortress located in the forest south-east of Falkreath, directly south of Ancient's Ascent.

This is where Vighar, an ancestor of Dengeir of Stuhn who became a vampire is hiding out. In addition to Vighar, there are also vampires, their thralls and death hounds. An arcane enchanter, an alchemy lab, and two beds can be of use.