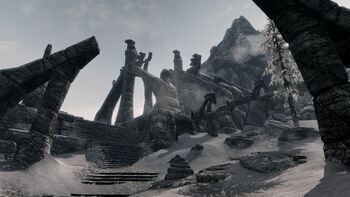 Bleak Falls Barrow is a Nordic ruin located across the river and up the hills to the west-north-west of Riverwood. On the way is a unnamed Nordic tower occupied by bandits. As a typical barrows, it was built in ancient times to house the remains of Nord dead.

This is the first area inside the ruin. It is home to several bandits, skeevers, draugrs and a Wounded Frostbite Spider. There is one pillar puzzle which opens a trapped gate behind which is a copy of the skillbook "Thief".

The thief who stole the Golden Claw, Arvel the Swift, is also within, trapped in a web.

In the room with the pillar puzzle, there are three stone tables (one of which has fallen). From left to right, they read Snake, Snake, Whale, indicating that the same order should be used on the pillar along the left wall (if you are facing the locked gate).

This area contains likely the first of Dragon claw door puzzles to be encountered in the game as well as likely the first word wall, containing the one of the words of power from the shout Unrelenting Force. As soon as the Dragonborn reads the word wall, a levelled draugr erupts from his sarcophagus which is carrying the Dragonstone.

Draugr- The majority of enimies are Draugr.

Bandit Outlaw- The bandit that fails the puzzle and gets killed by poisonous darts. Can be a Bandit Thug at higer levels.

Skeevers- 3 found at the spiral staircase. Several dead ones can be found near the first bandits inside the ruin.

Frost Troll- Replaces a draugr if you are at a high level.

Draugr Overlord- The boss of the dungeon, carrying the Dragonstone and guarding a Word Wall for the first word of Unrelenting Force.