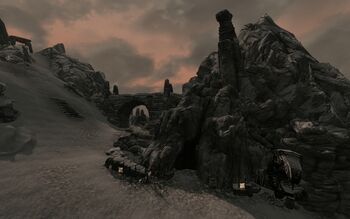 Benkongerike is a snowy cave north-east in the north of Solstheim, it is located between Saering's Watch and Headwaters of Harstrad. The cave is a significant dwelling for Rieklings (×23), among them hunters, scouts, warriors, chargers and also Bristlebacks.

On a pedestal the Benkongerike Key can be found.

Notable items beyond the gate a word wall for the shout Cyclone and the Black Book: Untold Legends.

There is a pillar puzzle to open the door which leads to one of the word walls for the Cyclone shout. To solve the puzzle, look above the pillars for the correct glyph and rotate the pillars until the glyphs match. This is shown for three of the four pillars. For the second pillar (from the left), there is no glyph shown above. The more intrepid explorer will find the missing glyph placed on the eastern upper floor: "whale".

The combination (from left to right) is as follows:

Once the pillars are correctly rotated, pull the lever on the pedestal facing the closed gate.